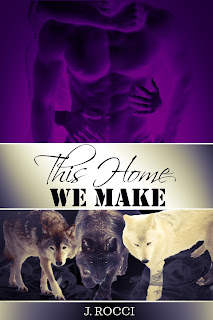 This Home We Make by J. Rocci
Genre: Urban Fantasy, werewolves
Rating: Explicit
Words: 9,870
Zev has no memory of where he comes from, and he only knows that without Callie and Gareth taking him in, he'd still be running wild as a werewolf in Georgia. Relocating to Washington D.C., he's having difficulty adjusting to city life as he fights to relearn his humanity (and fend off the vacuum cleaner). Zev starts making friends with a local pack and learns just how unusual his situation is, with the rest of werewolf kind looking down on them. Callie and Gareth have some hard choices if they're going to make their small household a pack, but Zev's yearning to belong to both of them will either drive them together or tear them apart. 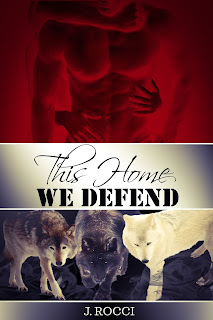 This Home We Defend by J. Rocci
Genre: Urban Fantasy, werewolves
Rating: Explicit
Words: 10,310
Zev has no memory of where he comes from, but now he has a pack in Washington D.C. with Callie and Gareth. Following "This Home We Make", Zev's search for his past hasn't really been a priority until a new werewolf starts lurking around the city, waiting to get Zev alone. The newcomer challenges Callie's alpha status, and threatens to undo the ties between the three lovers, testing their dedication to each other.
Posted by J. Rocci at 5/02/2017 08:50:00 PM

Email ThisBlogThis!Share to TwitterShare to FacebookShare to Pinterest
Labels: contemporary, free, m/m/f, polyamory, this home series, this home we defend, this home we make, werewolves