The concert-going continues but this may be our last for the summer. We'll see.  I hear Rise Against is coming to Baltimore in October, so I might still be tempted.

The group had dinner again at the Vagabond, which is connected (literally) to The National.  This time we got their full menu rather than the Restaurant Week prix fixe. We were starving when we arrived, so appetizers were cheddar beer bread (so good with the honey butter) and Mr. Bay had his beef tartare. My main course was the mushroom risotto, which had a nice consistency and was a large portion, but the sweet potato crisps were basically oily potato shavings that weren't actually crisp, so after the second stuck to my teeth, they were plucked to the side. Mr. Bay went with the lamb pot pie and was pleasantly stuffed by the end.

I liked the selection this time, unfortunately my food allergies reared their ugly heads and dinner did not sit well at all, so please recognize this review is after watching the show through a haze of Benedryl.

As an opening band, they were adorably shy, but surprisingly polished. I added from California above because there's also an established band from Denmark.  We couldn't decide what their sound was like - an odd combination of Soul Asylum, Smashing Pumpkins and Radiohead​ maybe?  They were energetic and playing for a happy, friendly crowd, and while I didn't know any of their songs, I wanted to by the end of their set.

AFI (A Fire Inside)
afireinside.net

Let me tell you a thing about AFI - my Muse has been a fan for almost two decades and the fanbase these guys have inspired is, in my opinion, truly unique.  I say this as someone who has been on the fringes of the fanbase. Other rock fans may write them off as sad emo kids in a corner, but at least the Richmond crowd has been consistently friendly, considerate and courteous to each other over the years.  It's a completely different atmosphere of positive vibes when you go into a small venue AFI concert (I can't speak to larger venues) than you usually get at rock concerts from the Nu Metal crowd etc. 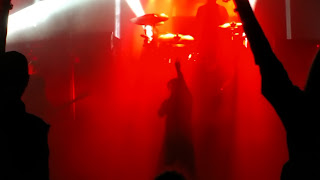 The set was a mix of their old and new songs -- which for a band that has had such a diverse sound / direction for their albums, putting together a cohesive and flowing set list from all over their career was impressive.  I was happy that I got to belt out "Miss Murder" and the Muse was squeeing over "A Fire Inside" from down in the pit, then "Aurelia" got stuck in my head for days. Even with dinner trying to kill me, I stayed until the end.
Posted by J. Rocci at 6/15/2017 10:31:00 PM