This Home We Make 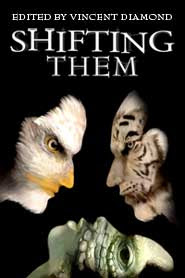 From the glamorous world of modern-day magicians to a futuristic universe filled with danger, the stories in Shifting Them will sweep you away into a whole new universe, where wolves scrabble about on city streets, where snake shifters plot from their nests, where a seemingly innocuous dog helps to make sparks fly between humans. Whether it's fur or fangs, these very human creatures have a wild side, one that excites and amazes.

This Home We Make
Zev has lost his memory, but found a new Pack with Callie and Gareth just south of Washington D.C. When he meets Ray, the Alpha of a pack out in the farmlands of Maryland, he makes his first new friend in the city, but Callie and Gareth aren't so trusting. With Callie upset at Zev and Gareth trying to mediate, their quiet homelife is disrupted until Zev can get to the root of his Pack's problems.